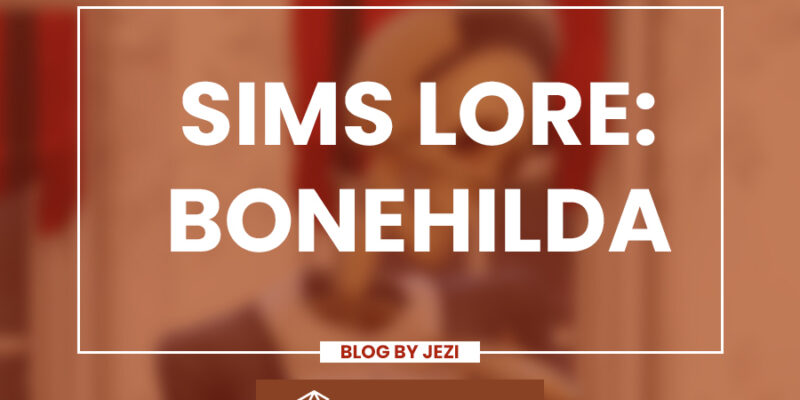 Ah, behold the legend and queen… Bonehilda! She is of the most beloved NPCs of all time throughout the franchise and has one of the most unknown backgrounds.  Bonehilda has made appearances in many versions of The Sims.  So what makes her so special? Well keep reading and find out why most Simmers absolutely adore Bonehilda.

Bonehilda in The Sims 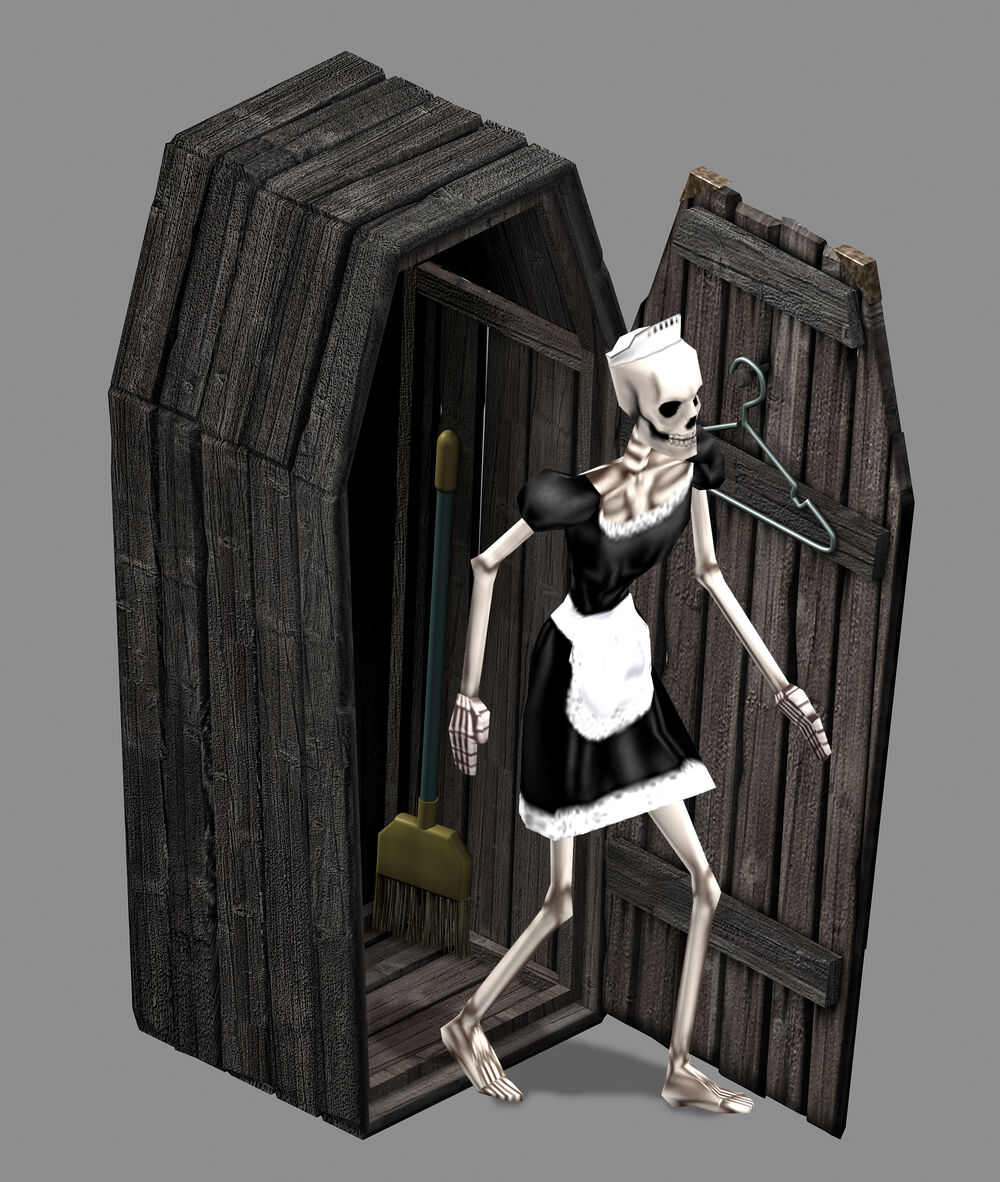 Bonehilda made her debut in The Sims: Makin’ Magic.  In Makin’ Magic there are two ways to get her in your game; one as a janitor in Magic town and the other as a ‘Skeleton Maid.’  If you wish for the Skeleton Maid you can purchase Bonehilda as a ‘Skeleton in the Closet.’ Once you have your closet in the game you can ‘Knock’ on the closet and this will bring her out to clean.  Bonehilda will clean and do chores, repair items, and take care of feeding your baby!  However, she will not entertain or serve food.

Bonehilda in The Sims 3 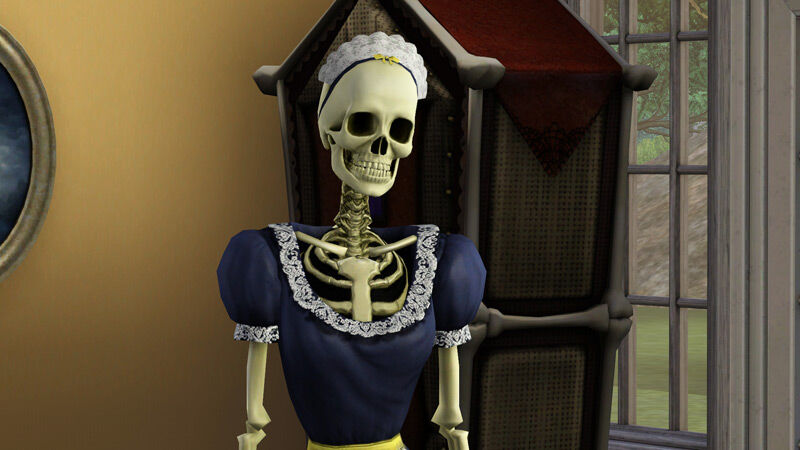 Bonehilda made a much-needed return in The Sims 3: Supernatural.  You can get her on your lot by purchasing  the ‘Bonehilda Living Quarters.’ Bonehilda acts similar as she did in Makin’ Magic, but this time she will cook meals.  Not only does she cook in Supernatural, but she will also teach pets tricks, put out fires, protect from burglars, and clean.  Oddly enough Bonehilda likes to drink and swim, and if a Sim is skinny dipping nearby she will steal their clothing.

Bonehilda in The Sims 4 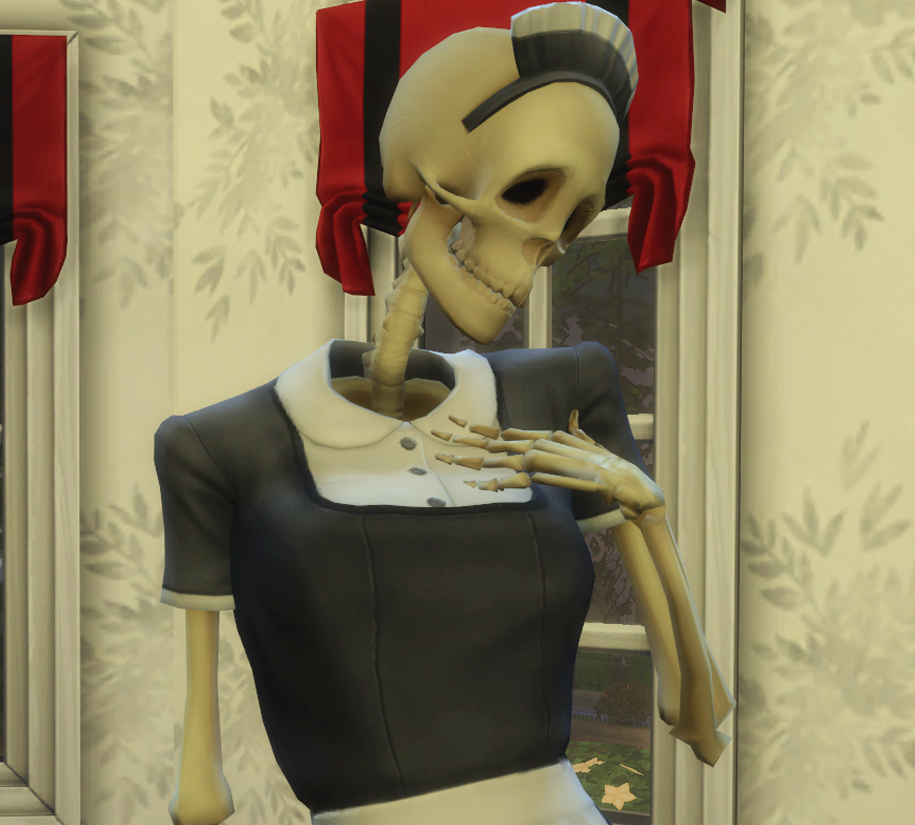 Of course, you cannot have anything Paranormal in the Sims without Bonehilda so she came back again for The Sims 4: Paranormal Stuff, and she was no doubt the highlight of the pack for many Simmers.  Rather than coming with a coffin… er ‘closet’ Bonehilda can now be summoned using the seance table or seance circle.  She will again do many of the tasks she had in previous renditions, but will also act as a bodyguard during specific events while conducting Paranormal Investigator gigs.  She will also now garden and take care of toddlers while building their skills.  Also new is the WooHoo with adult Sims, that is right you can now have a romantic relationship with Bonehilda. 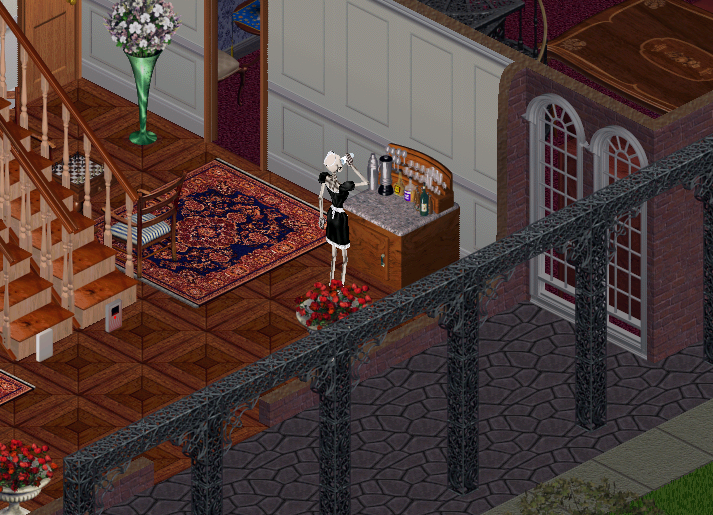 So there are some similarities throughout the series and renditions of Bonehilda, so let’s take a look at them and see if we can find any clues as to her backstory.  She is usually in a supportive role as a maid, but she is more than a maid, she is a friend, a lover, caretaker, animal trainer, and she likes to have a good time.  Sadly for Bonehilda if she has a nice glass of nectar before heading back to the closet it will go straight through her.  We also know she is generally very handy, however, she will electrocute herself from time to time. 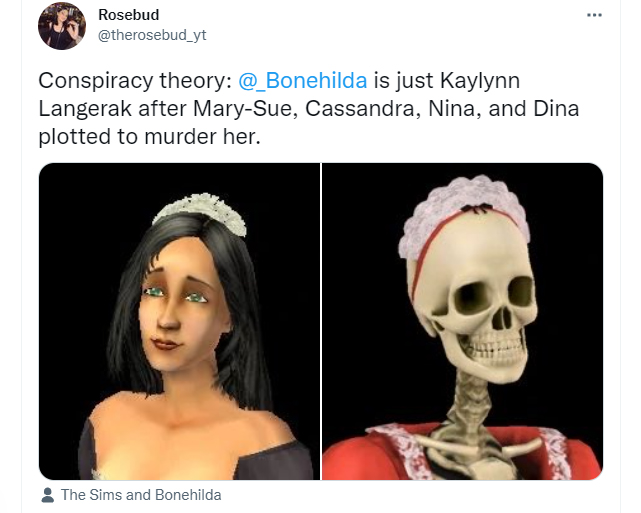 There are several fan speculations, on Bonehilda’s origins, however, my favorite is one from Rosebud, who posed the plot of Bonehilda being Kaylynn Langerak.  If you don’t know who Kaylynn Langerak is, she is from The Sims 2 & The Sims 3 and is a Sim that has relationships with both Daniel Pleasant and Don Lothario.  So, Rosebud’s theory is that Mary-Sue Plesant, Cassandra Goth, Nina Caliente, and Dina Caliente all plotted to get rid of Kaylynn.  I mean… it would not be the first ‘disappearance’ that the Goths, Lothario, and Caliente’s were involved in. 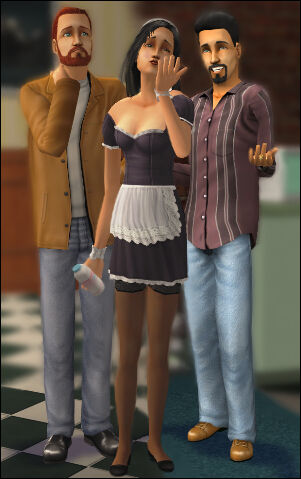 Do I think Bonehilda is Kaylynn, I’m not really sure, so let’s look at the facts. Really I think any romantic involvement with anyone near Nina and Dina is probably doomed, but who knows. What is interesting is that Kaylynn wears a french maid outfit in Sims 2 (she was a maid) and has cleaning, mechanical, and cooking skills.  It should also be noted that Kaylynn’s cleaning is maxed out. So the only oddity really is that Bonehilda is in The Sims 3 when Kaylynn is a child, however, there are some wacky time travel/alternate timeline things that could be going on again, so it does not really disprove anything. 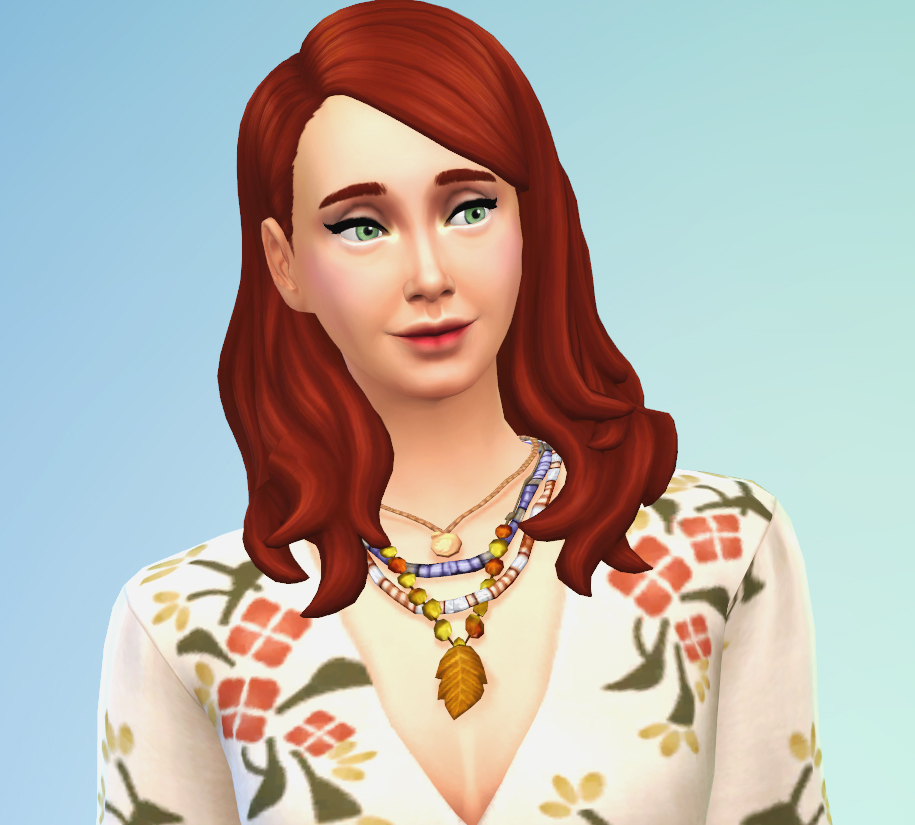 As far as appearance if Bonehilda takes a shower or you change her outfit in the Sims 4 she is human and has red hair and green eyes. This does not appear to be a glitch as her appearance is always the same. Now Kaylynn does not have red hair but she does have green eyes.  There are also some age issues with Kaylynn between Sims 2 & Sims 3 as her aging does not quite match other Sims that are in both of those games. 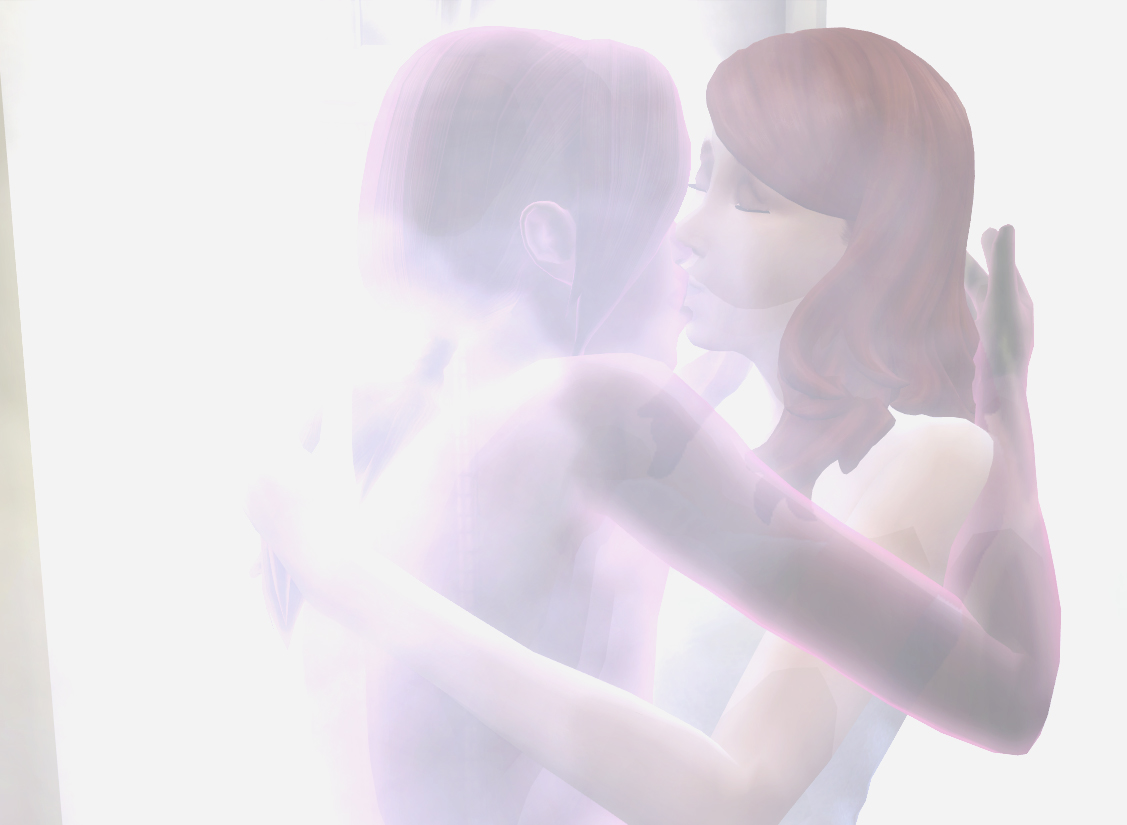 So I am not convinced Kaylynn is not Bonehilda, however, I am also not convinced she is.  But Bonehilda being Kaylynn is the most interesting theory to me and I just really want to know what Bonehilda’s story is.  I could see her getting into trouble with romance as Bonehilda is quite a flirt. She is such a neat and likable character in The Sims franchise that she NEEDS a good story with some tea! Well, she probably has one, we just need to know.