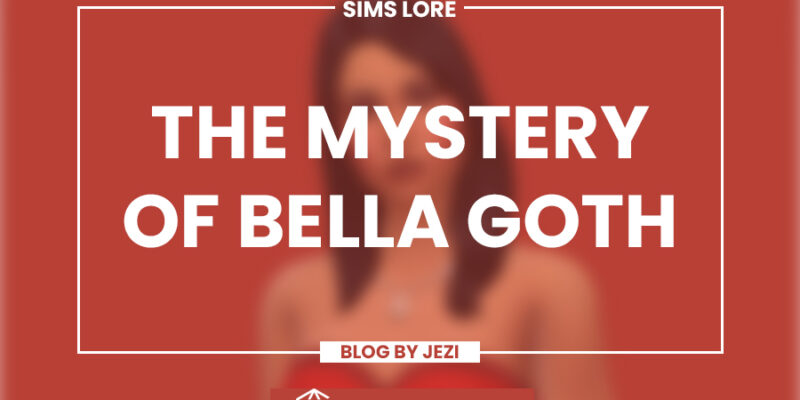 For our first blog of our Sims Lore Series, what better way to start off than with one of the most iconic Sim Townies… Bella Goth.  Getting ready for some Townie tea as we enlighten you with The Mystery of Bella Goth. 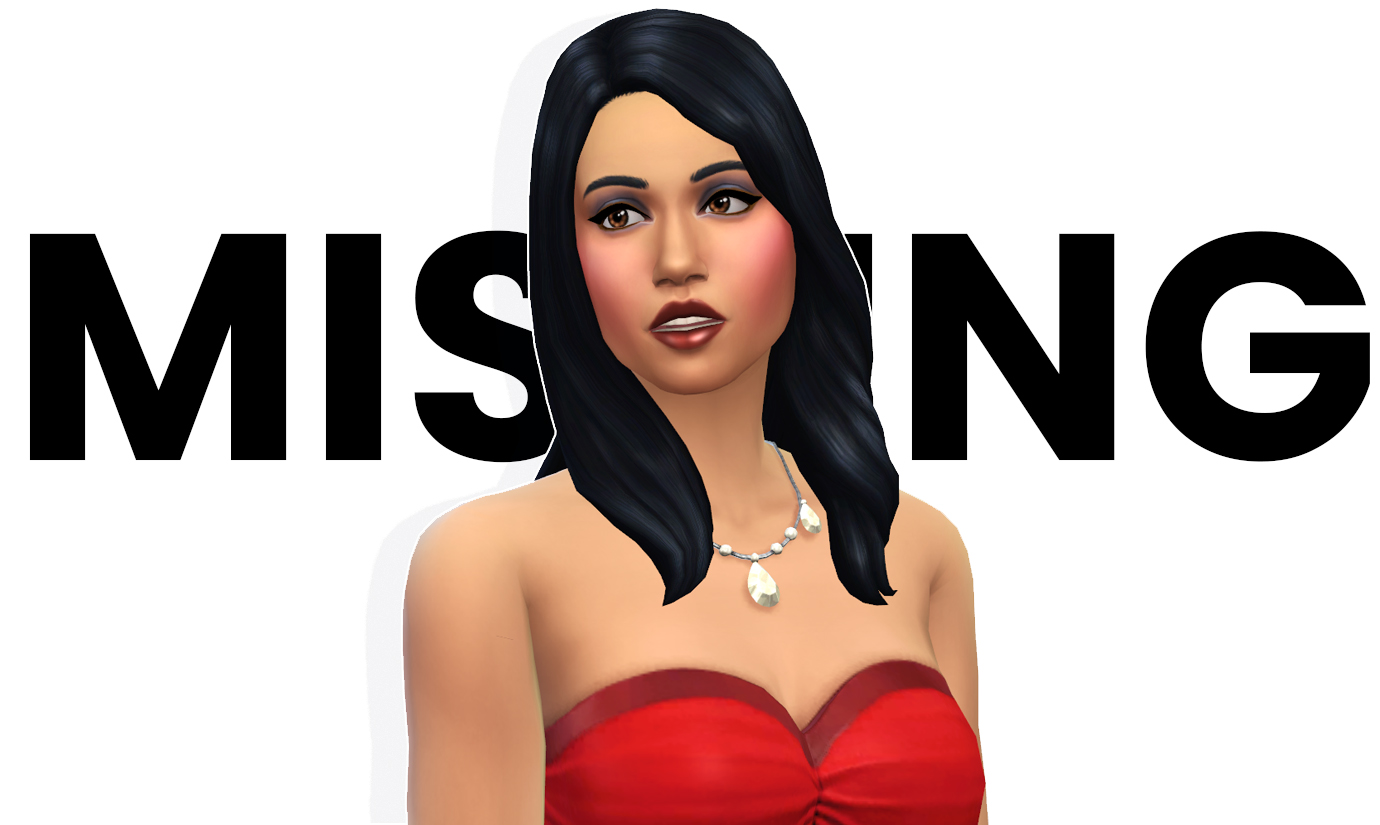 Bella Goth has been a pre-generated character in every single version of The Sims.  The Italian meaning of the name Bella means beautiful. So it is no doubt that Bella is one of the most gorgeous Sim Townies.  She is so popular that a lot of Simmers actually have gameplay with Bella.  What? yes, Simmers playing with a Townie Sim. You read that.  and No it’s not just to ‘get rid’ of her.  Bella is just a popular Townie Sim. 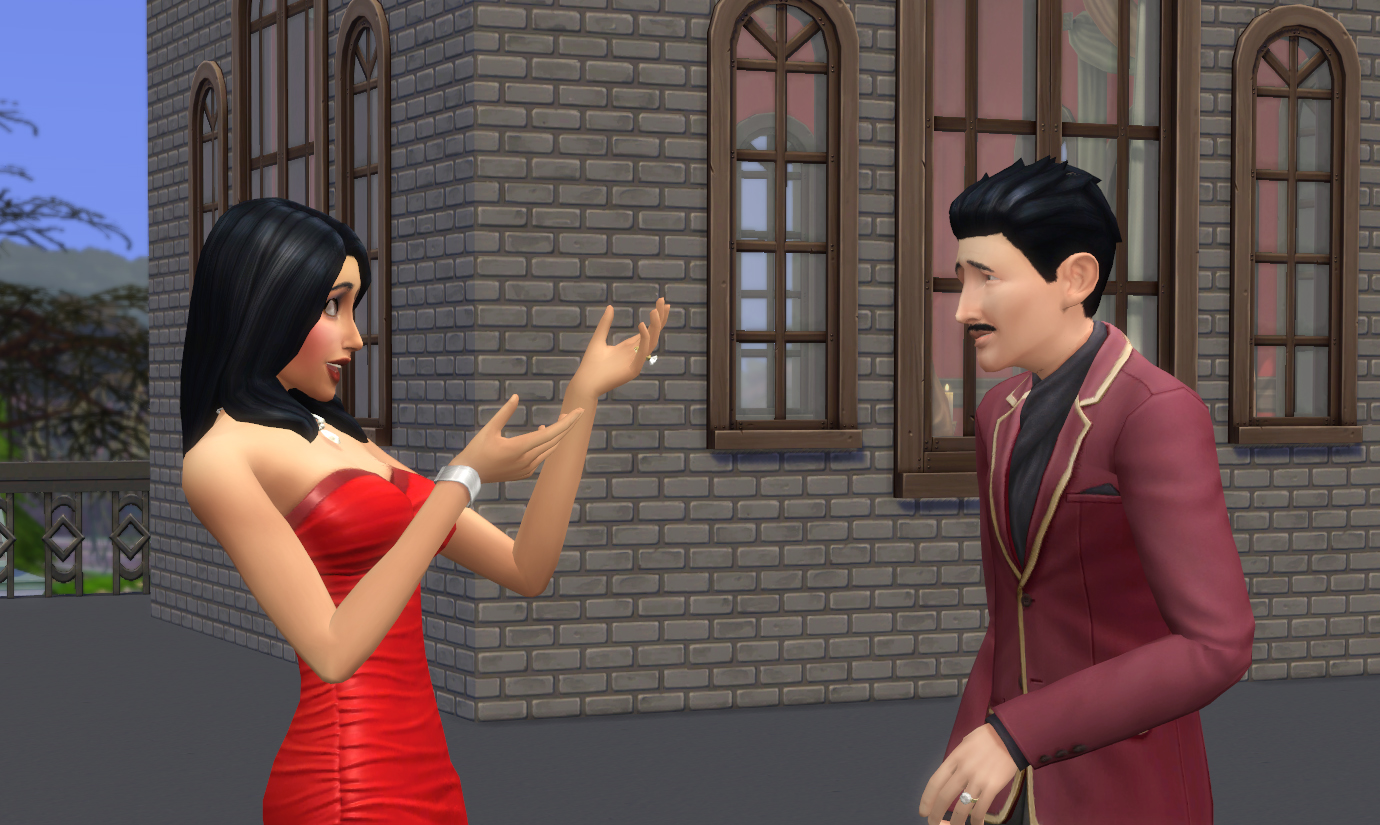 Bella’s maiden name is Bachelor, which means she is the younger sister of Michael Bachelor.  You can find Michael in Sims 1, 2, and 3.  Well, kinda Sims 2… spoiler he is a ghost in Sims 2.   This is a little bit of a confusing part as each game is in a different duration of time.  Sims 3 Bella is a child, Sims 1 she is an adult, Sims 4 a young adult, and Sims 2… well missing… kind of.. we will get to that. 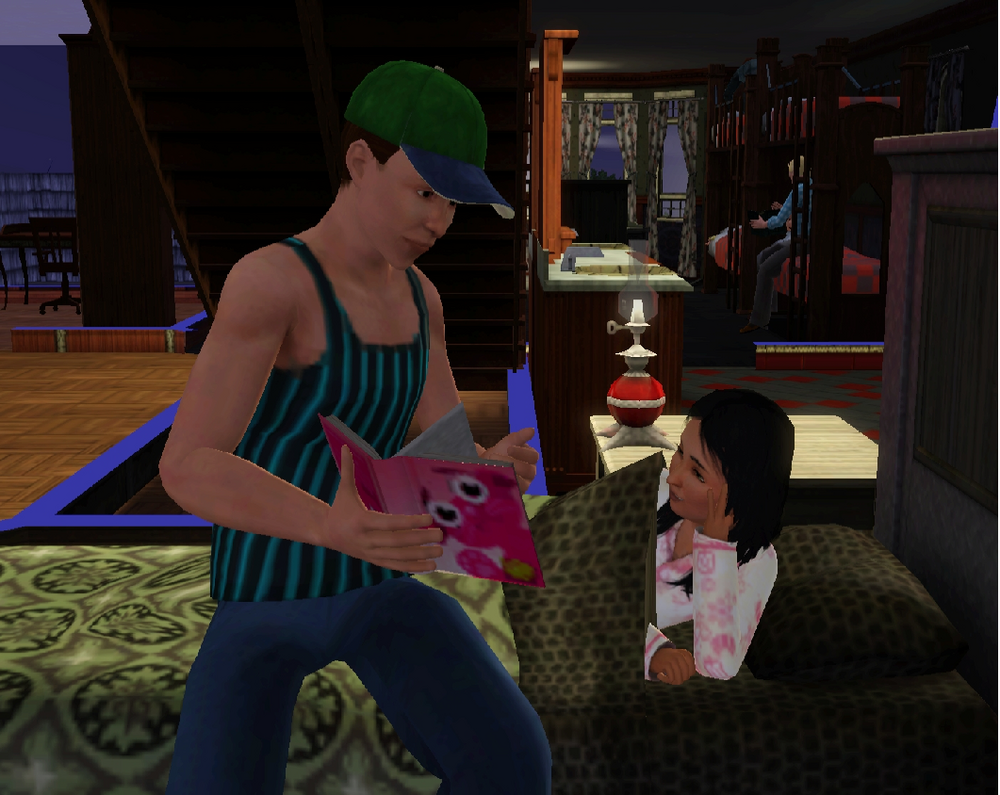 Michael and Bella in Sims 3 Image from the Sims Wiki

In Sims 1, 2, and 4 Bella is married or presumed to be married (Sims 2 as she is ‘missing’) to Mortimer Goth.  In Sims 1 Bella and Mortimer have just one child named Cassandra and in Sims 2 & 4 Alexander is also added to the family. Bella’s look changes from game to game, but she is generally in a red dress with brown or black hair and brown eyes.

It is notable that for reasons *unknown that the Sims 4 is presumed on an alternate timeline.

Bella is described to be elegant, athletic, beautiful, romantic, lucky, brave, good, and family-oriented.   In Sims 2 her aspiration is Romance and in Sims 4 it is Party Animal. Bella is also to said to be interested in the paranormal. 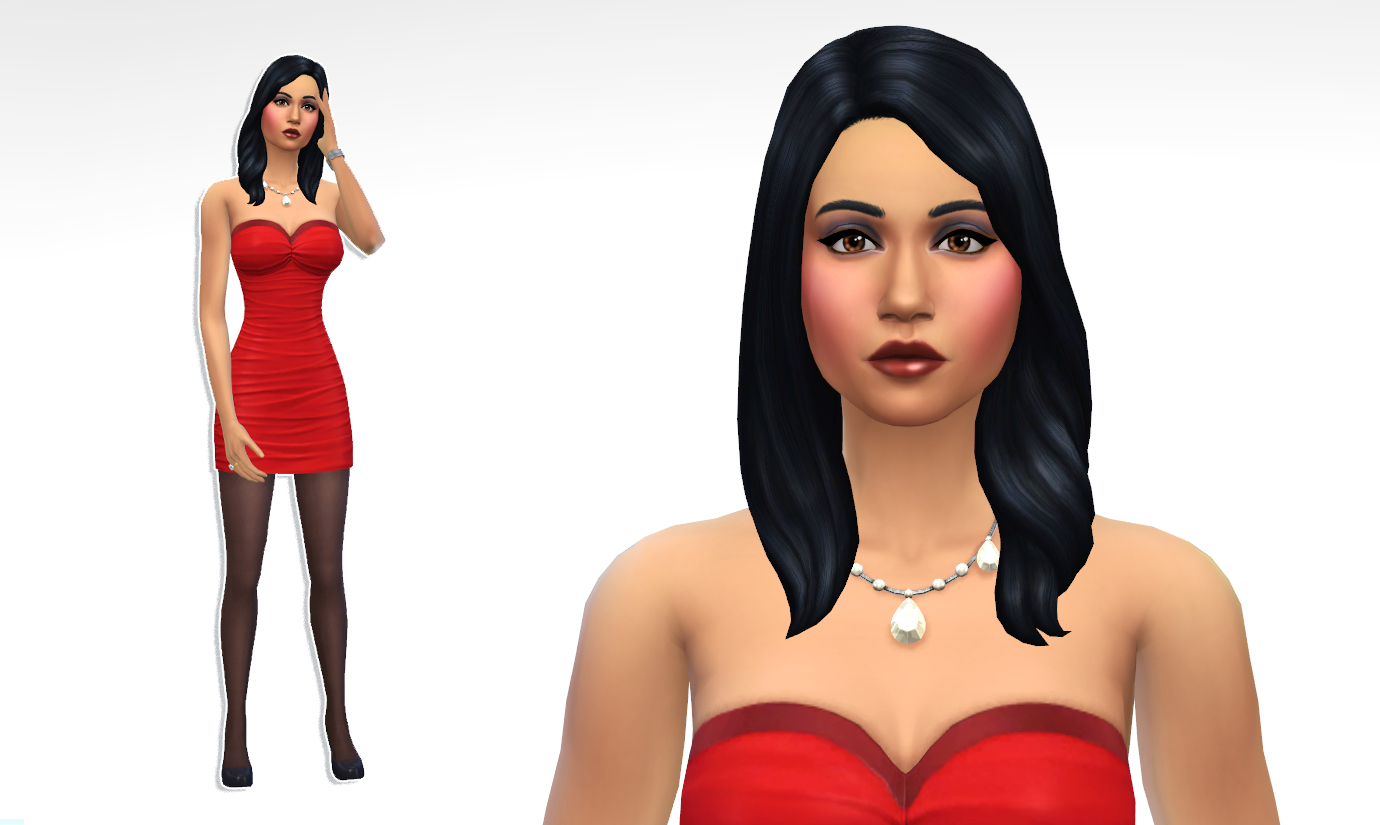 When you play or see Bella in your game you can watch her strut and kindly but flirtatiously interact with other Sims.  She always in my games seems to be very kind and good as her traits describe her.

The Mystery of Bella Goth and it is no secret that in Sims 2 Bella goes missing, leaving Mortimer, Casandra, and Alexander all alone.  This is super sad, why would a good Sim like Bella just leave her family?  Suspicious much? Absolutely! 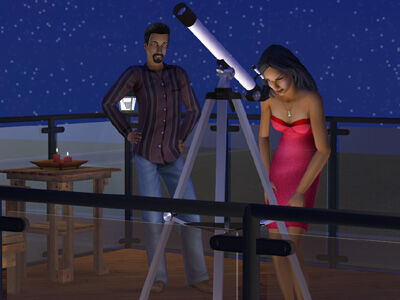 Bella at Don’s home Image from The Sims Wiki

With any missing persons, there should be no stone left unturned and no lead left behind.  As you will see in Bella’s case there is limited physical evidence available.  However, there are lots of drops of tea with these juicy rumors. So let’s solve the Mystery of Bella Goth!

The most obvious first suspect in Bella’s disappearance is Don.  This is mostly due to the questionable relationships Don has had.  According to a witness Bella was seen over at Don’s house arguing with Don.  Don was also seen showing Bella his telescope.  Was he trying to get rid of her? 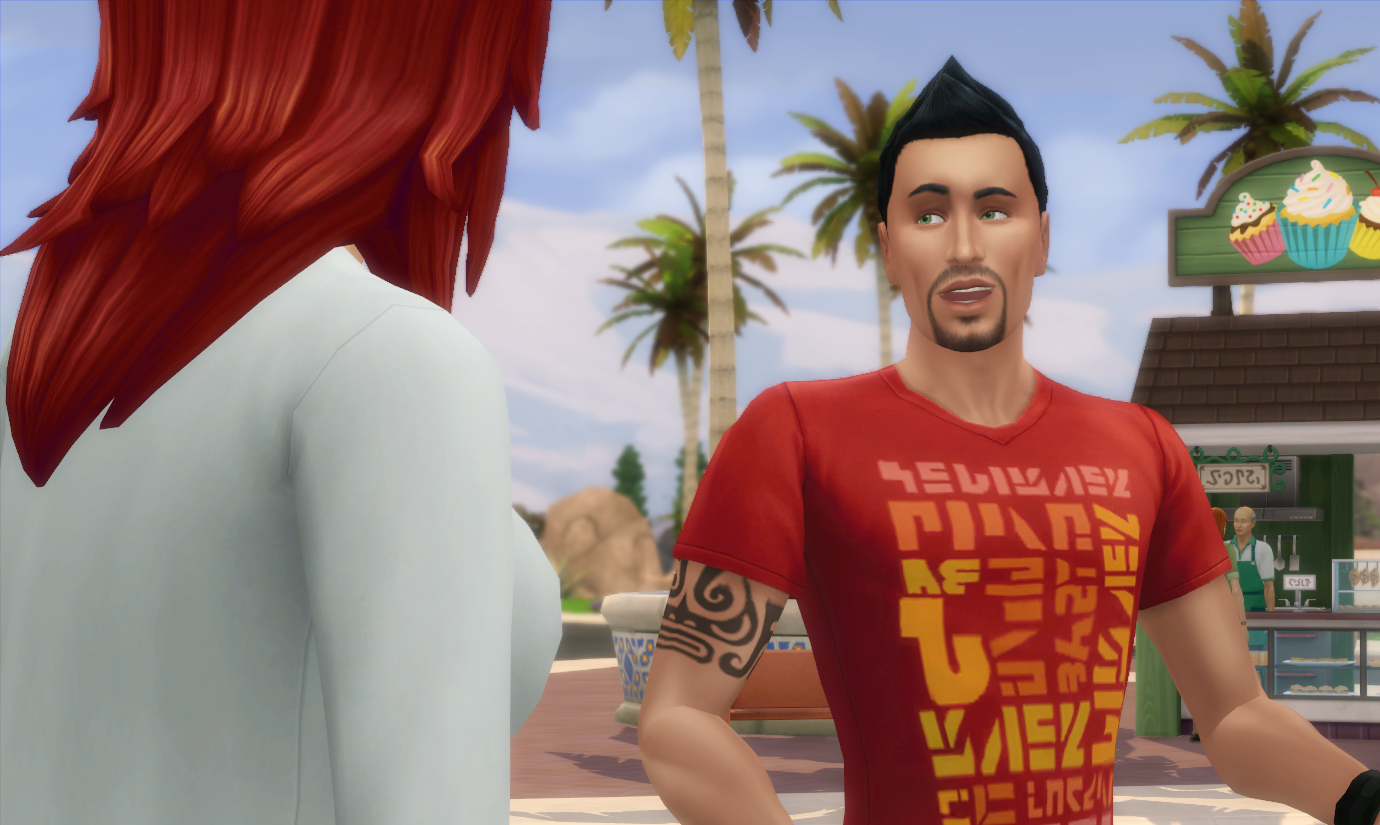 The most consistent and partially confirmed theory is that Aliens abducted Bella. It is a very well-known fact that Alien abductions can happen in the Sim worlds.  Bella was seen by witnesses looking through Don’s telescope.  If you match Don’s story and the fact that he travels back in time to Sims 3, this theory makes a lot of sense.  That time travel and evidence at Lunar Lakes just screams Aliens. 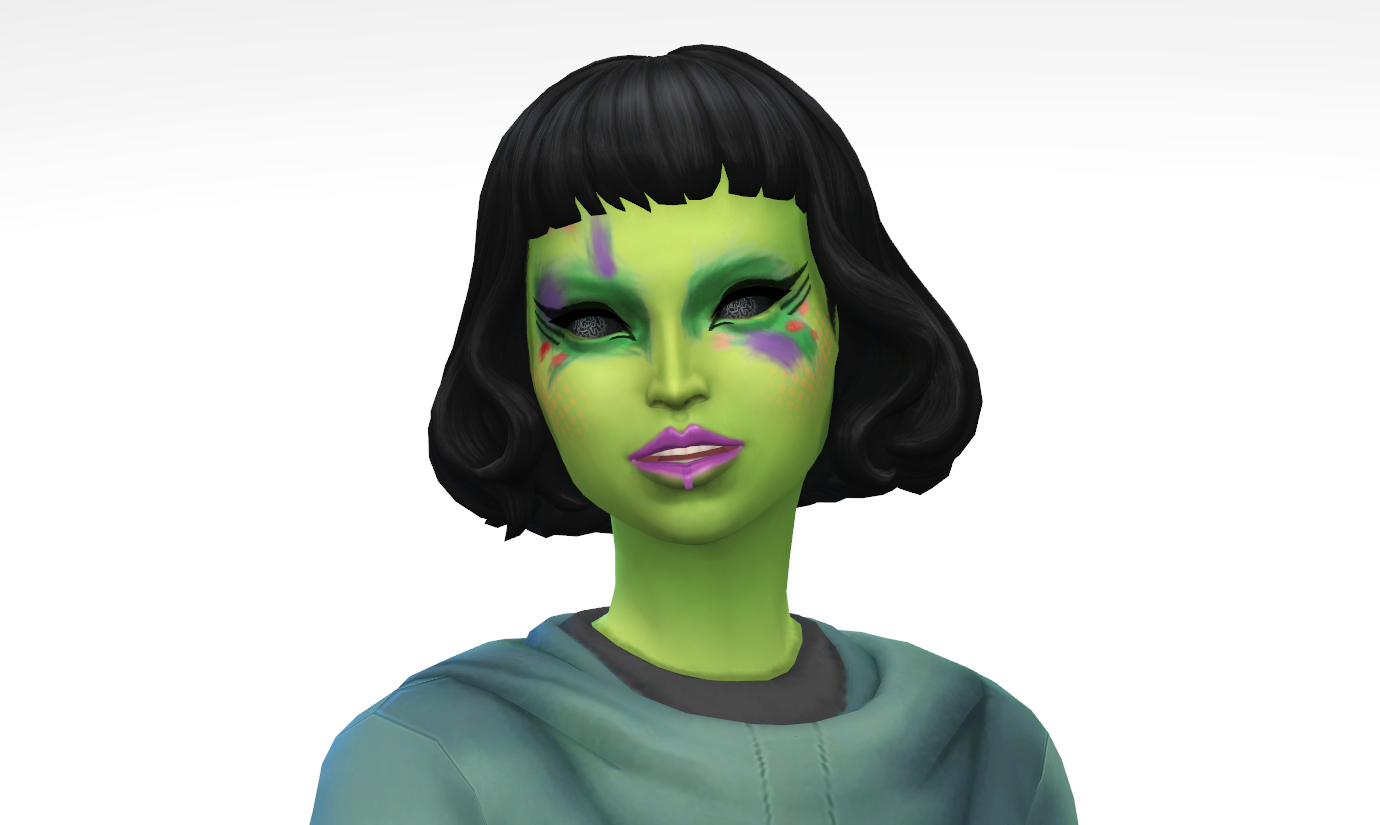 The Caliente Sisters are often seen as the number of suspects in Bella’s disappearance.  Well, for one Don was romantically involved in at least one Caliente sister.  Maybe this is what the argument was about between Don & Bella? 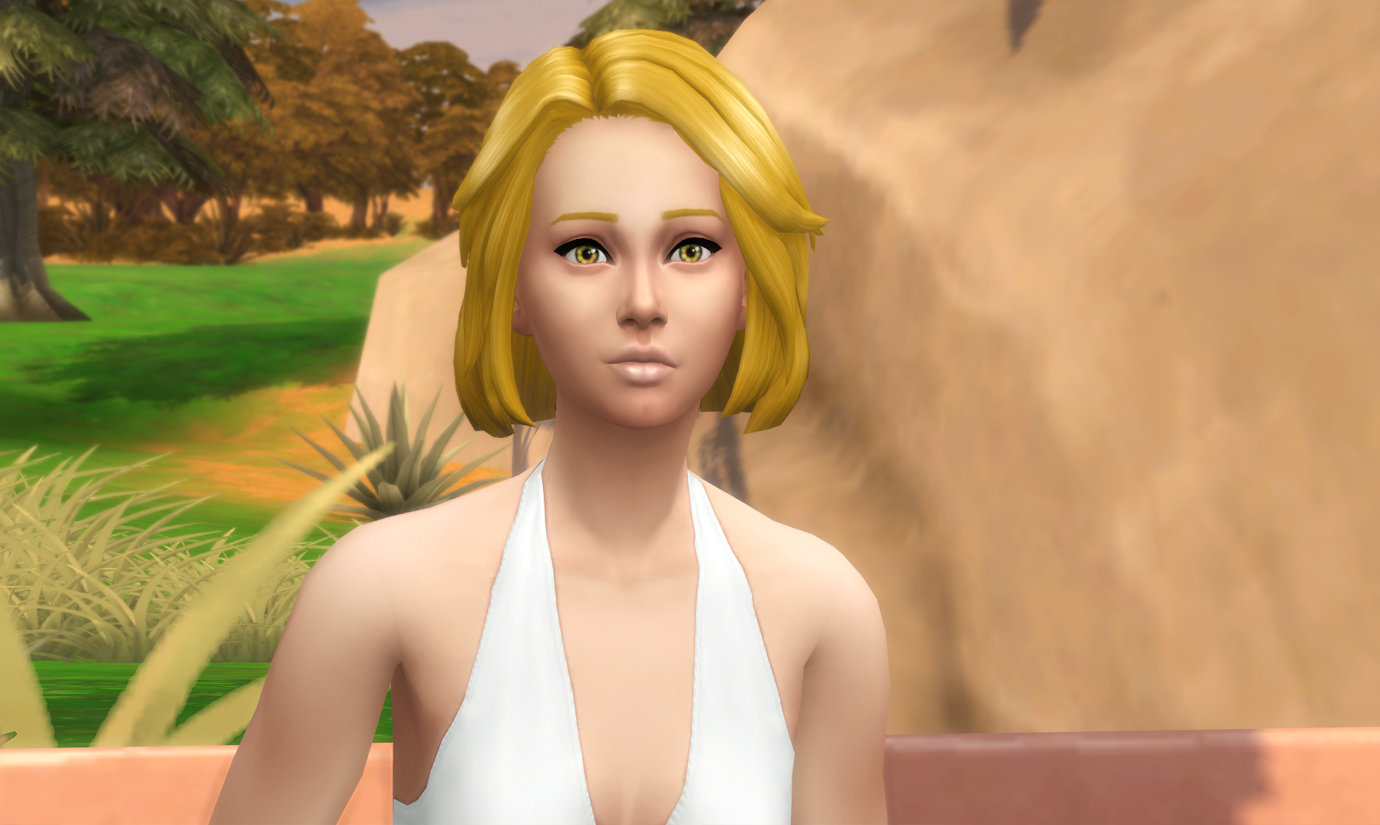 Nina and Dina are also in fact part alien. (not in sims 4) Yes!  Their father was the result of an alien abduction! Making Nina & Dina also part aliens!

Also, noting Diana marries Michael Bachelor (Bella’s Brother!!!) and is rumored to have romantic relationships with Don Lothario, and then Mortimer Goth! What is going on here!  It is important to note that Lusia Libros’ (roommate of the Caliente Sisters in Sims 3) biography states that she cannot bring home any romantic interests “as there is a strong possibility that Dina and/or Nina will Swoop in on the action.”

Goth and Caliente Family Tree image from The Sims Wiki 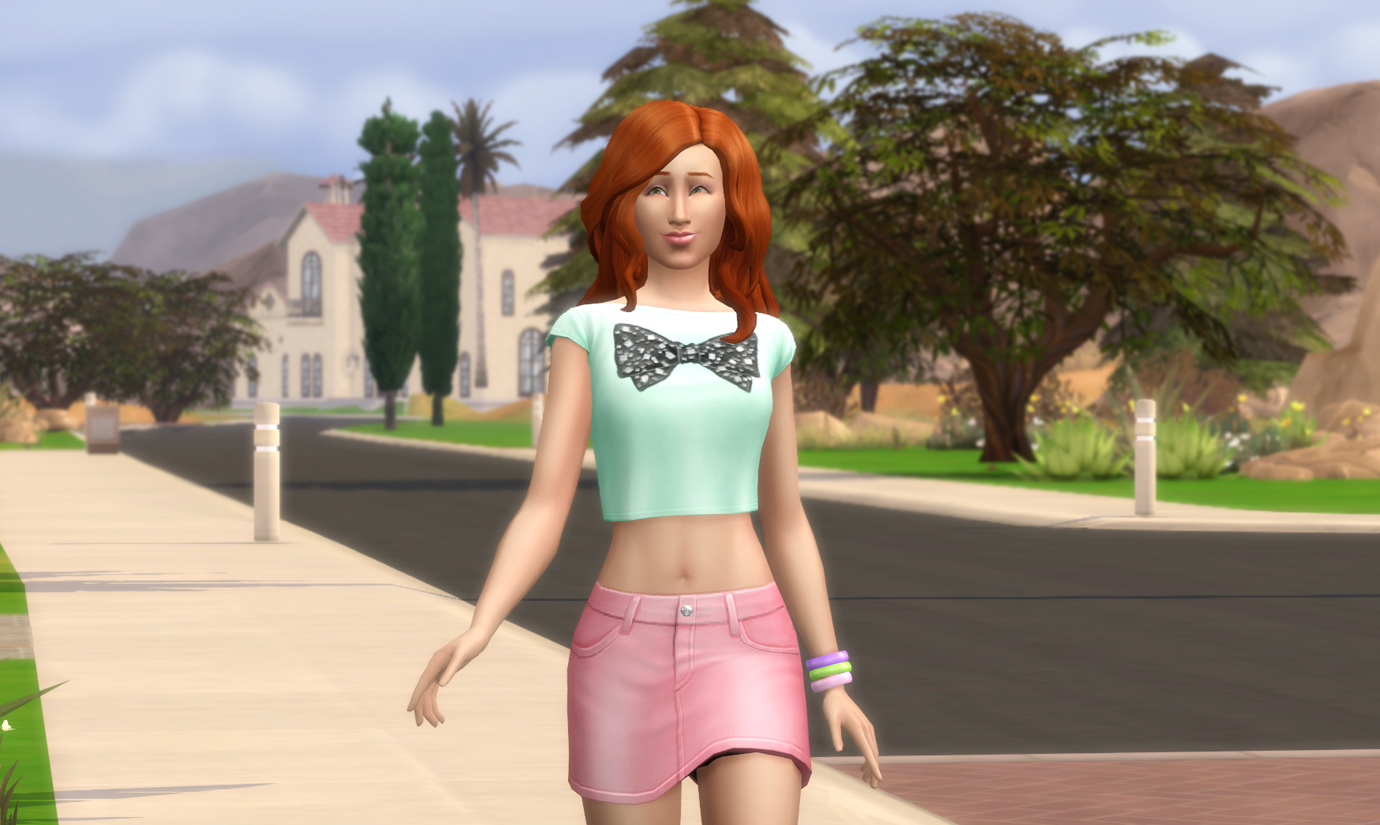 Interestingly enough Nina’s Sims 3 biography reads “The Sims 2 Sisters are Back! The eldest twin, Nina is a worldly Sims who has a storied past and is up for adventure She is the brains of the operation.” Something is definitely up here.

It is a rule in every missing case that you start looking at those closest to the victim.  Rumors were going around that Bella and Mortimer’s relationship was not in good standings.  There were rumors of infidelity on numerous levels. 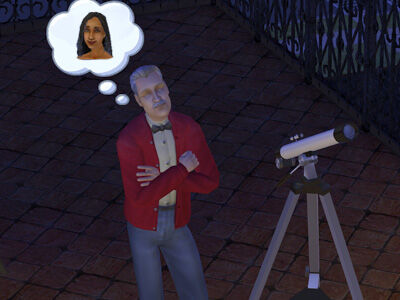 Maybe Mortimer had had enough or did Dina put him up to it? In Sims 3 there is a book titled “Murder in Pleasantview” written by none other than Alexander Goth who isn’t even born yet (time travel!).  Did Alexander hear something from his father?  It is curious as Mortimer seems unimpacted by his wife’s disappearance. 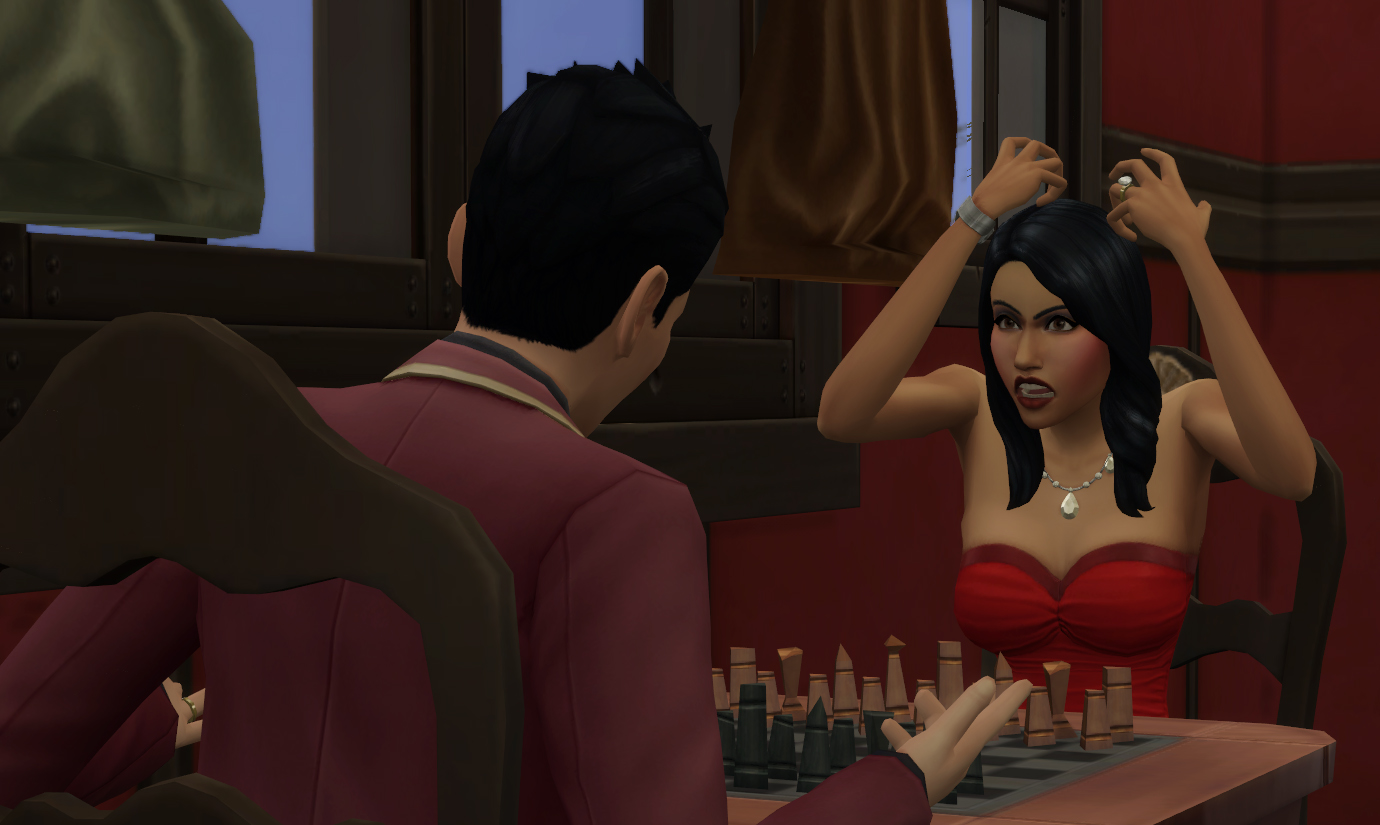 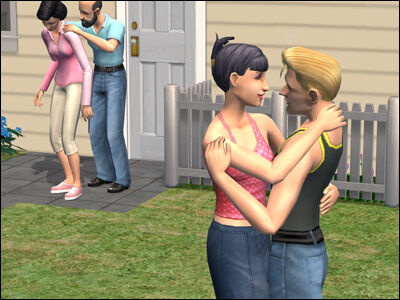 Or… Did Bella Run Away

In any missing person case with limited physical evidence, one must always examine if the individual simply ran away.  If Bella married for money this would be a plausible reason for her to run away. 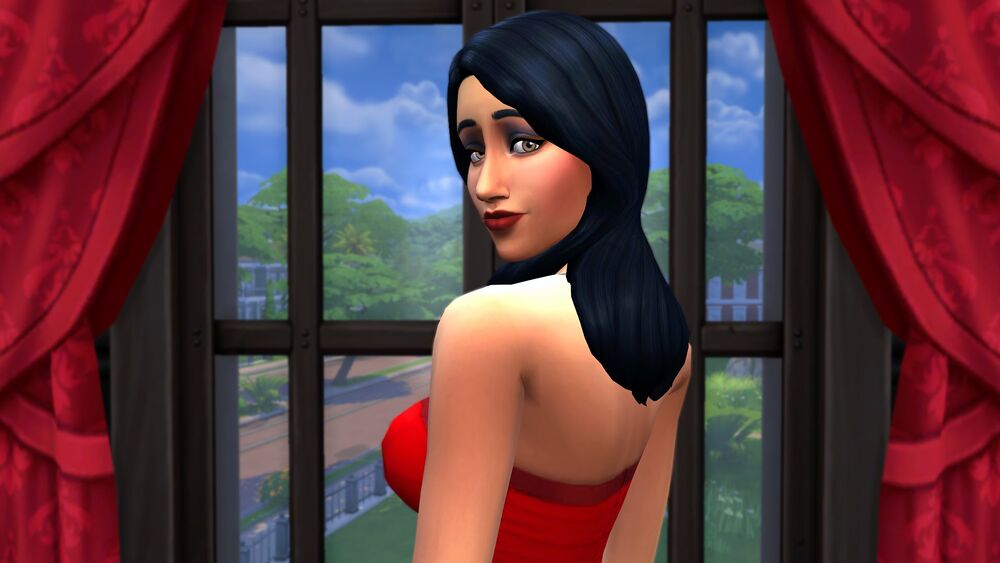 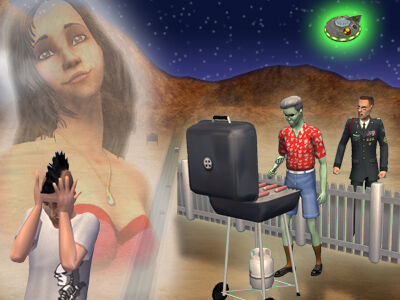 Strangetown image from The Sims Wiki

In the Mystery of Bella Goth, Bella is missing for quite some time in Sims 2 until she reappears in Strangetown (Sims 2 PSP).  According to Bella (Strangetown Bella), she was abducted by Aliens and ran away.  Her biography in this version is “A slightly-crazed woman you met on her way out of town.” She is named Bella Goth and looks like Bella Goth.

In The Sims 2 (PSP) you get to know some of Bella or at least Strangetown Bella’s secrets.  You find out through these secrets according to Bella that she married for money and never really loved Mortimer.

Bella in Littlehaven (The Sims Social) 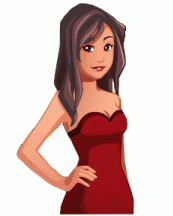 Image from The Sims Social Wiki

After Strangetown Bella moves to Littlehaven (The Sims Social)  which is in the game The Sims Social.  Bella has no memory of what happened since the night of her abduction and she is determined to find answers.  Bella then tries hypnotherapy and she gets her memories back and past life experiences.  It would appear Bella is afraid that she will get abducted again and lose her memories so she keeps a journal and plans to publish it at some time.

Witness testimony puts Bella Goth at Don Lothario’s home in Pleasantview before she disappeared.  Witness statement also includes that Bella was seen using Don’s telescope and that Don and Bella had argued about something.  This statement makes Don the last official Sim to see Bella Goth before her disappearance. 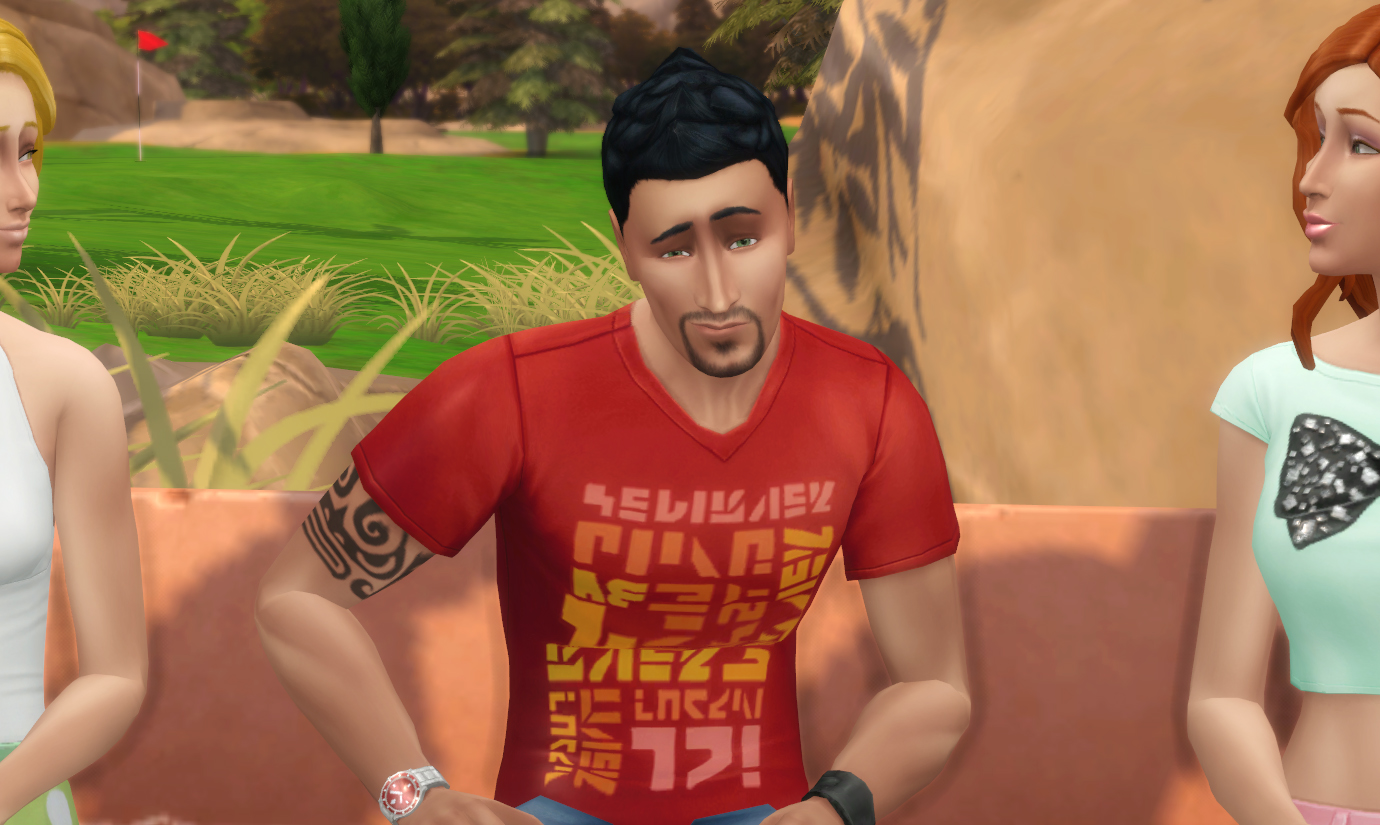 You can find numerous easter eggs in Sims 2 and Sims 3 that mention Bella.  There is the Hula Zombie that looks like Bella, the broken snow globe, the vision of the lady in the red dress in the hot air balloon, Belladonna Cove, Unusual Bellacite (space rock), hints of time travel in Sims 3 when playing the Private Investigator Career and… In Sims 3 players will notice the book “Murder in Pleasantville” written by Alexander Goth, does this book have clues on his mother’s disappearance? 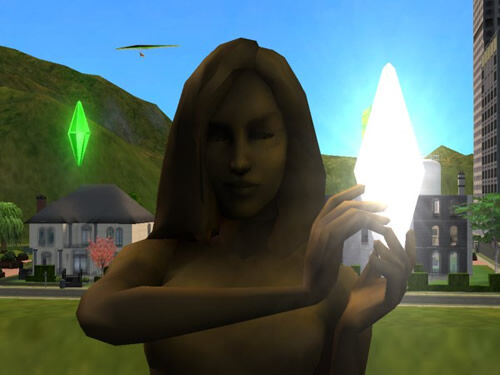 Statue in Belladona Cove Sims 2 image from The Sims Wiki

In Strangetown Bella claims to be hiding from the aliens that abducted her and she has no memory of the abduction.   In Sims 3 you can also find a gravestone in Lunar Lakes with the name on it of Bella Goth and is confirmed to be the real Bella Goth.  Strangely, there is a Goth living in Lunar Lakes, Mathilde Goth. 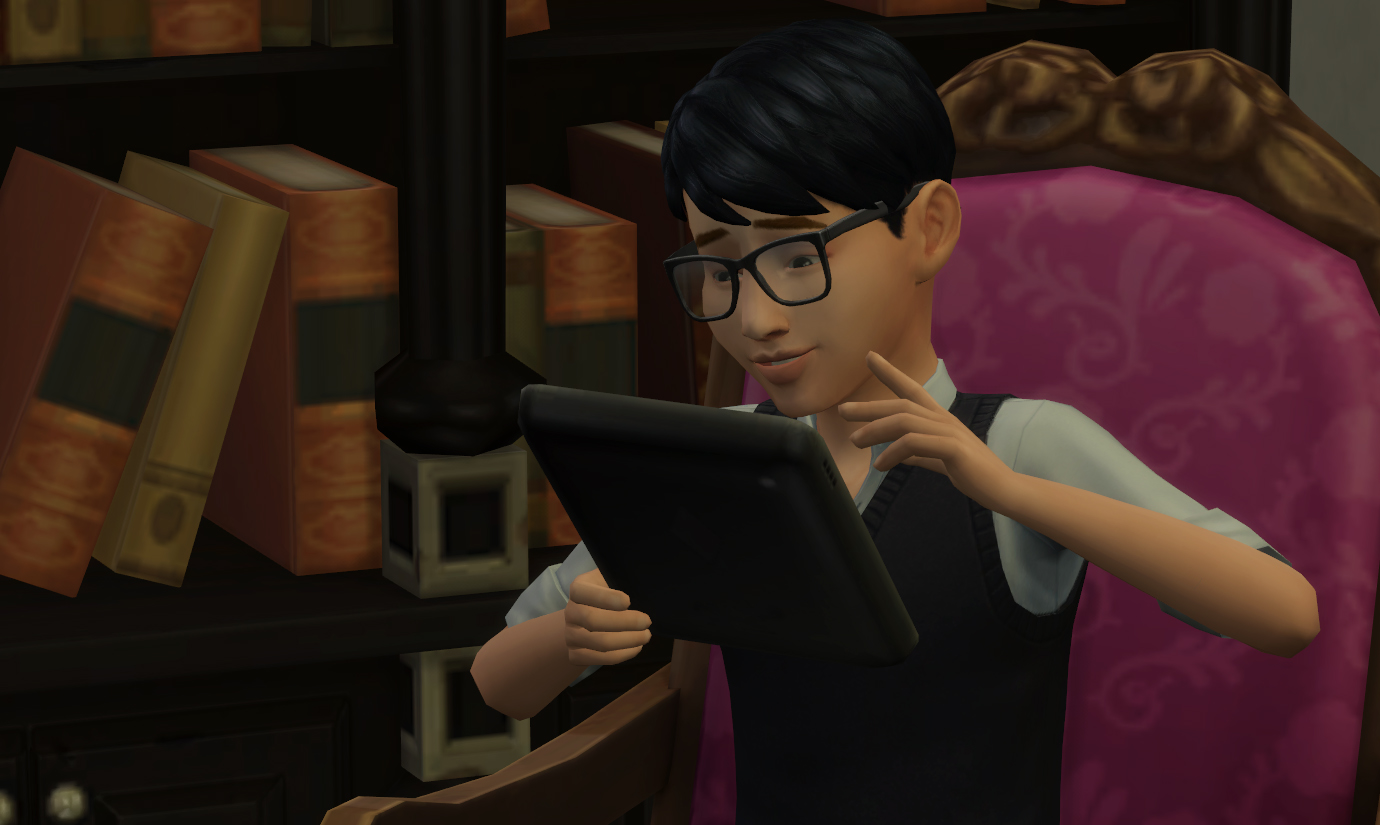 The internet is full of theories on the mystery of Bella Goth, the official lore is that Bella is buried in Lunar Lakes.  This would make Sims 4 is an alternate timeline, leaving a lot left for us to decipher.  Given the evidence, there are obvious signs of alien abduction and time travel.  When looking at the evidence it would appear as rumors were true that Bella had an affair with Skip and possibly Don. (Of course, Brandi most definitely killed her husband Skip.) 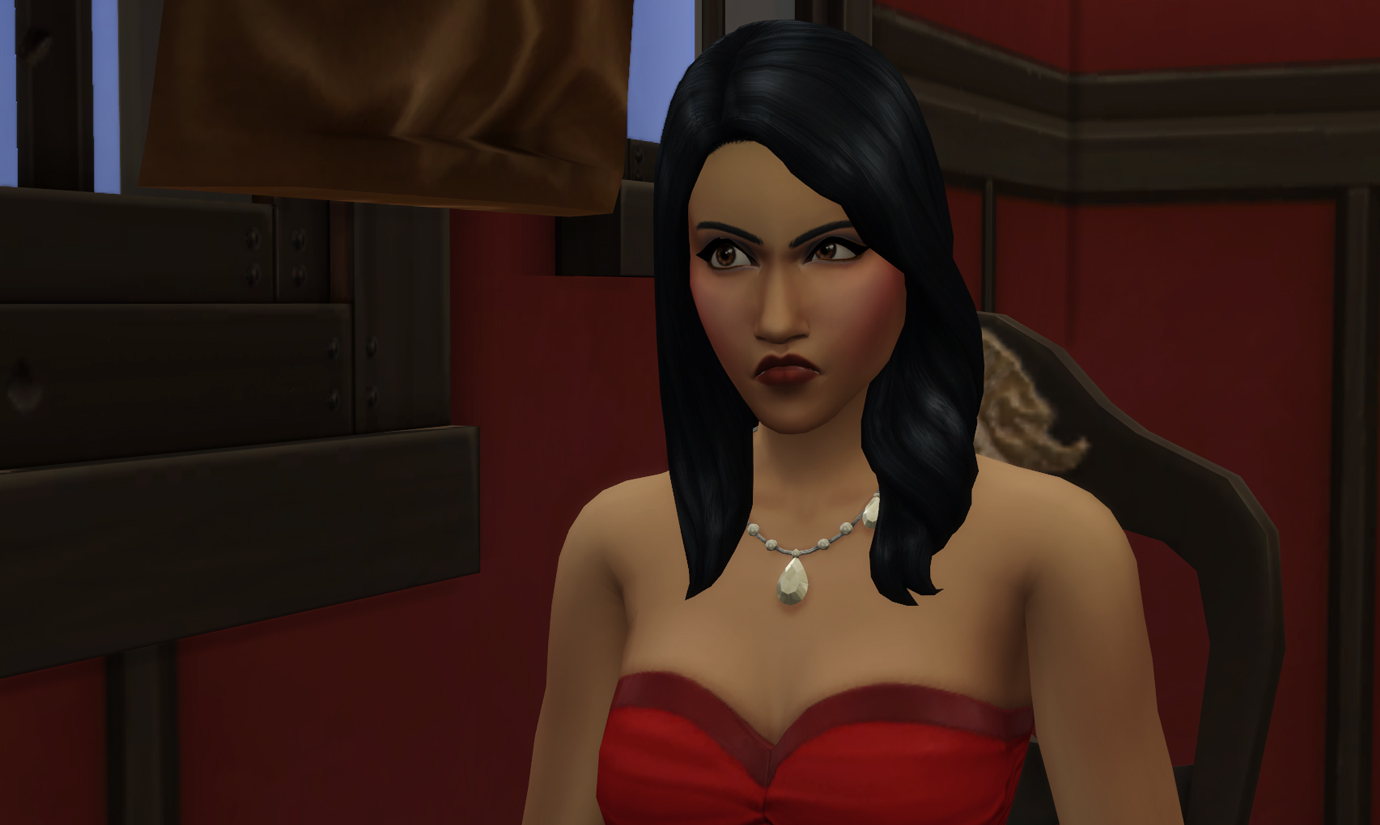 Don and Bella were arguing about something (He probably hit on her).  They saw something in the sky and were looking at the telescope and POOF She was abducted! 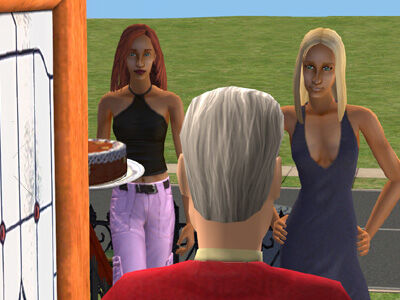 Image from the Sims Wiki

It would appear from the evidence and timing that it would have been the same Aliens that dropped Dina and Nina off in Pleasantview that abducted Bella.  Whether the timing is circumstantial is unknown, but it definitely looks predatory.  The sisters seem to be able to find the right opportunity for some instant cash flow.  Of course, the right opportunity meaning to move in on Mortimer.

Mortimer who is unimpacted by the disappearance most likely in my theory believes that Bella ran away with another person.  Leaving his children to suspect he had something to do with her disappearance. 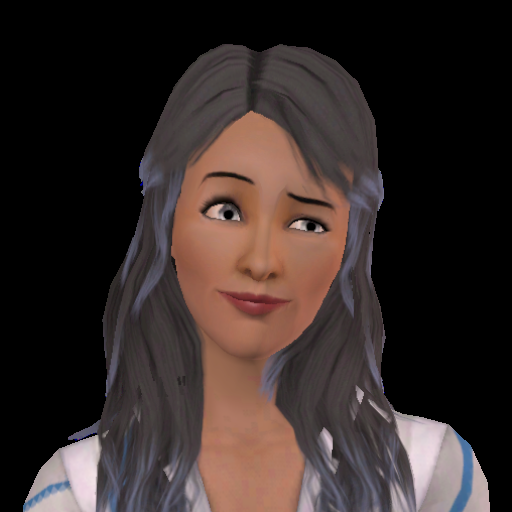 Therefore, Bella was abducted by Aliens, escaped, tried to run, and then was brought to Lunar Lakes,  had Mathilde Goth, who can be found in Lunar Lakes in Sims 3.  Of course, there is some really confusing time travel, but this explains the Zombie Hulu dancer and the Bella Sim in Stragetown.

Well, there you have it.  The Mystery of Bella Goth is that Bella was abducted by Aliens.  There are tons more theories out there, but the official Guru comment is that the Lunar Lakes gravestone is in fact Bella Goth. Whatever the case maybe I am glad that in Sims 4 Bella is included.  As the Goths are my favorite Townie family! 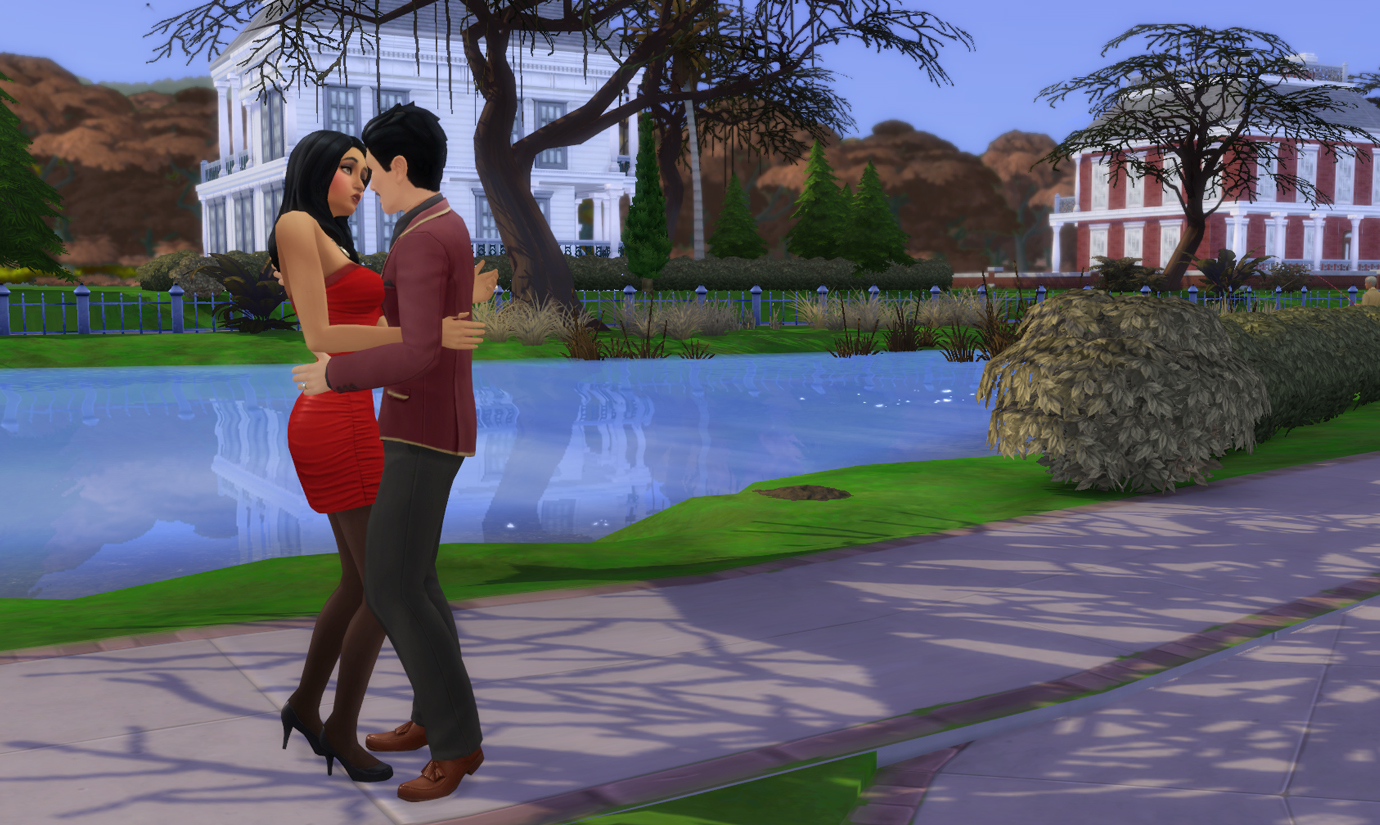 We hope you enjoyed the Mystery of Bella Goth, stay tuned for more Sim Lore, as we plan to keep investigating more about the Sim Townies!

*Images not captured by TSR Staff will have a link for credit.